You’ve probably seen some bizarre aircraft before, but the Bartini Beriev VVA-14 could be the strangest yet. This vertical take-off amphibious aircraft was a wing-in-ground-effect aircraft developed in the Soviet Union during the early 1970s and designed to take off from the water before flying at high speeds over long distances. This meant that it could not only complete flights at high altitude, but also flying efficiently just above the water. Read more for a video and additional information.

Its unusual aerodynamic ground effect was created by Robert Bartini, a talented Italian designer, in response to a requirement to destroy United States Navy Polaris missile submarines. The VVA-14 first flew on September 4, 1972 and a total of two prototypes were built before its retirement in 1987. During that time, the aircraft conducted approximately 107 flights, with a total flight time of 103-hours. 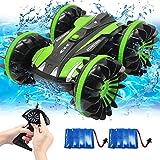